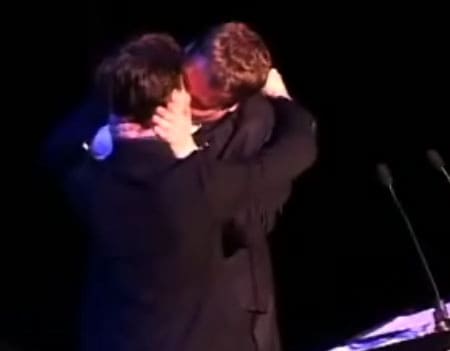 Daniel Radcliffe won the “Newcomer of the Year” prize at the Whatsonstage.com Theatregoers’ Choice Awards at the Lyric Theatre in London on Sunday night. The awards was less of a shock for Radcliffe than what happened when he went to go collect it:

“But no one was more surprised than the actor himself when, as he approached the microphone to give his acceptance speech, Awards co-host James Corden passionately – and to wild applause – locked lips with him. Before he said his thank-yous, Radcliffe confessed to having a ‘Madonna and Britney Spears’ flashback.”

The “kiss” appears just after the 3:00 mark. It really looked like the host was not going to let go.