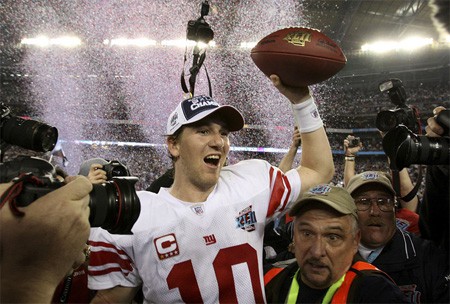 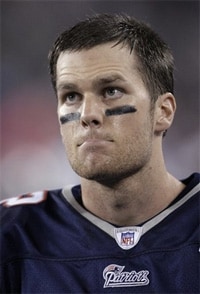 Giants co-owner John Mara called it the “greatest victory in the history of this franchise” and it certainly was a stunning upset:

“Manning connected with Plaxico Burress for the winning touchdown, a 13-yard pass with 35 seconds remaining in the game. Manning drove the Giants 83 yards in just over two minutes after the Patriots had marched down the field to take a 14-10 lead. Manning was named the Super Bowl most valuable player a year after his older brother Peyton won the same award for the Indianapolis Colts. It was, fittingly, a brutal sack of Brady by Jay Alford with 20 seconds remaining that all but ended the Patriots’ final chance of saving their unblemished record. Brady heaved the ball nearly 80 yards in the air in a desperation shot to reach Randy Moss with 10 seconds left, but the fourth-down pass fell to the ground.”

John Travolta flew his own plane in to the Super Bowl and managed to get a chat in with Seacrest before the game: 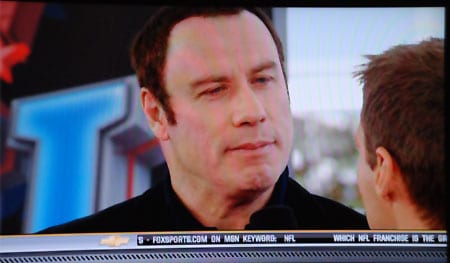 Said Travolta: “I’m a New York boy and I like the Giants except I did choose the Patriots 34, Giants 24. I want a good game. I think you got the best team vs the hottest team and we will all hope for the best game possible, because I come to the Super Bowl for a Good Game.”

No doubt Travolta was pleased that the hottest team won.

Photographer Paolo Pellegrin took a look inside the Giants locker room for the New York Times.

Citing rules that restrict favoritism, FOX declined to run any candidate ads during the Super Bowl but Barack Obama found a way to get in on the Super Bowl Sunday right before Super Tuesday.

The Obama campaign made a local ad buy in 20 Super Tuesday states to run this ad.

Hillary Clinton watched the Super Bowl at a Sports Bar in Minneapolis, where she was campaigning, the AP reports:

“When New York scored the go-ahead touchdown with 35 seconds remaining, Clinton leaped up and high-fived some young people standing near. ‘That was unbelievable,’ she said. ‘Oh my gosh.’ Filing out of the room after the game, Clinton gushed to reporters. ‘I’m so excited, I’m thrilled,’ said Clinton. ‘It was a fabulous game.'”

There was no major “Snickers-style” controversy in the Super Bowl ads this year. AfterElton felt the two ads above were slightly homophobic. The Prison Break ad, because the bisexual character was tackled, and the Bridgestone ad, because Richard Simmons is targeted by a reckless driver.

Although I see their point, I don’t feel as strongly. I think Richard Simmons is viewed as more of an annoyance by most than as a gay person, and that’s why he was used here, although there is that stereotypically ‘flamboyant’ element to his character. But I do feel the Bridgestone ad could have appealed to a wider audience had the driver targeted Ann Coulter. Just sayin.

I was a bit disturbed by the Amp Energy ad with its car battery nipple clamps, however. Don’t try this at home.

Previous Post: « Rearview Mirror: Looking Back at the Week on Towleroad
Next Post: Same-Sex Unions: Victories in Oregon, NY, Setback in Florida »