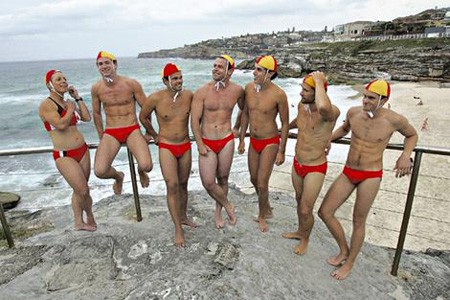 Sydney has seen a sharp increase in the number of gays and lesbians joining the ranks of lifeguards, or “livesavers” as the Aussies call them, since last year’s Mardi Gras parade, when a squadron of LGBT lifesavers marched and encouraged others to join them.

“Lifesavers with Pride spokesman Drew Lambert said numbers had doubled since the organisation had a float in the 2007 parade. ‘This year we expect 150 people to be part of the float,’ he said. As a patrol captain and instructor at North Bondi Surf Life Saving Club, Mr Lambert has seen a big increase in the number of gay lifesavers. ‘When I rejoined North Bondi a few years ago there were only a couple of gay guys in the club, now there are around 20 or 30,’ he said. One of the new recruits is Michael Webster, who recently moved to Sydney from Queensland. ‘Seeing the guys and girls in last year’s Mardi Gras made me reconsider the lifesaving movement completely,’ he said. ‘I’ve always loved swimming, but I never thought I would be the right fit for lifesaving. I’m so glad I was wrong, because the skills I have learnt have given me the ability to save someone’s life.'”

Here is their ‘recruiting’ video: