Cyberbully drives 16-year-old Brit to suicide by posing as an online boyfriend: “The 17-year-old posted a fake profile on the social networking site Bebo, then told friends and teachers intimate details of their online conversations. The 16-year-old victim, from Brighton, East Sussex, swallowed 60 painkillers.” 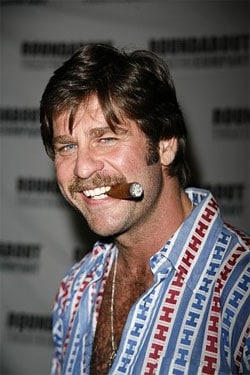 Hard Drive: Porn star Ryan Idol (Marc Anthony Donais, pictured here at an event for The Ritz) named in Birmingham Mayor Larry Landford’s computer charity scandal: “Katopodis testified in his deposition that Donais, the adult-film actor, was paid to help the Council of Cooperating Governments and the Computer Help for Kids programs, both of which were handling money and expenses for Langford’s computer initiative. Donais, a former Playgirl Magazine centerfold, has starred in seven gay adult films. Katopodis pointed out in his testimony that Donais also has appeared in plays in New York City. ‘He’s a businessman and had been working as, had done several off-Broadway productions and had been writing a play,’ Katopodis testified. ‘I don’t know what else he was doing, you know.’ Donais received $5,000 from the computer charity and $25,000 from the council, according to court filings. ‘He’s very good at working on computers,’ Katopodis testified. ‘He’s very adept at computers. But at the time he was working at the Council, he didn’t work on computers.'”

WATCH: Did Paula Abdul shop at Z Galerie to get the frames for her new video?

Christina Aguilera visits Ellen DeGeneres, who admires the fullness of her breasts.

China draws up plan to combat HIV/AIDS in its gay population: ” The policy will incorporate detailed HIV/AIDS prevention measures for MSM (men who have sex with men) including extending the use of condoms, according to the ministry’s work plan for disease prevention and control in 2008. China has decided to intensify its AIDS intervention campaign on MSM by carrying out AIDS prevention training among the gay population nationwide as well as conducting consultation, HIV/AIDS tests, venereal disease treatment in some areas, the ministry said.” 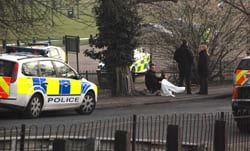 Gay man stabbed to death at public men’s room in Britain: “Appealing for witnesses, a spokeswoman for Surrey Police said the victim, who was gay, was stabbed in toilets at Walton Bridge, an area known as a popular meeting place for men. She said: ‘Early indications lead police to believe that he might have known his attacker though we don’t know in what context or for how long.”” UPDATE Man arrested.

Paris Hilton promotes her new film by posing with the only audience that actually went to see it.

UK vandals attack “Some People are Gay, Get Over It” billboard: “Sadly, the vandalism of a small number of the new Stonewall billboards is a reminder that homophobia still exists in our society and highlights the need to address the issue in schools and in our communities.” 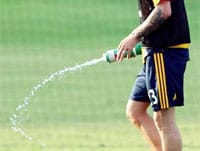 David Beckham gets lei’d, scratches, and squirts in Hawaii.

Targets of homophobic UK arsonist discuss attacks: “Nicholas Hughes, 42, and his partner of 16 years Peter Cameron, 59, suffered years of “horrendous” verbal homophobic abuse from Sonny Lockwood and members of his gang before he set their house in North Downs Crescent, New Addington, on fire.”

William F. Buckley: “Mr. McCain is a bit of a girlie-man when it comes to waterboarding high-value detainees; but that’s a tricky one, even for macho, red-meat conservative chest-thumpers. You get a pass on that one if you’ve spent five-and-a-half years being bastinadoed by North Vietnamese.” 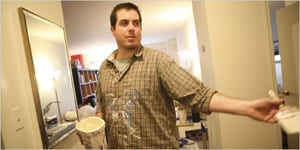 Jason West, the former Mayor of New Paltz, NY, is now a house painter in Manhattan: “Mr. West, 30, first drew attention in 2003, when at 26 he became the first member of the Green Party to be elected mayor in New York State. But it was the next year when he created a furor for performing same-sex marriages that were later declared illegal — which may have led to his current occupation and his summer stint bartending at a Dutchess County watering hole called Darby O’Gills. Mr. West was defeated in a re-election bid in May 2007.”

Gay history of Cambridge University to be revealed: “Evidence for the University’s gay past can be found from as early as 1619, in a memorial in Gonville & Caius Chapel. It was commissioned by the college’s master Dr John Gostlin in memory of himself and his friend Dr Thomas Legge, sometime Vice-Chancellor of the University. A flaming heart held aloft by two hands bears the inscription’Love joined them living. So may the earth join them in their burial. Oh Legge, Gostlin’s heart you still have with you’. A similar monument can be found in Christ’s College Chapel, where John Finch and Thomas Baines, who met as students at the College in the 1640s, are buried in the same tomb and commemorated with an elaborate carving of a marriage knot.”

Previous Post: « Israel Has Its Own Pat Robertson: MK Blames Gays for Earthquake
Next Post: Towleroad Guide to the Tube #246 »