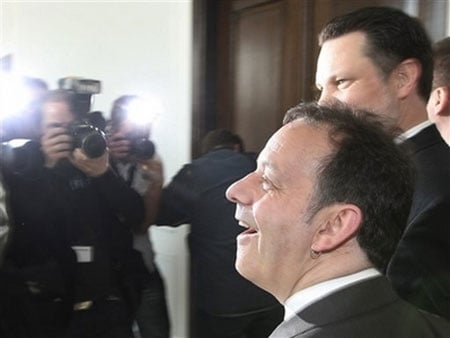 Brendan Fay and Tom Moulton, the couple whose wedding images were used in a nationally broadcast address by Polish President Lech Kaczynski without their permission, made a trip to Poland over the weekend to open a dialogue with Polish legislators and spread a message of tolerance. Kaczynski had used the couple’s video to warn the nation that supporting the Lisbon Treaty, which is linked to the EU Charter of Human Rights, would mean that same-sex marriage could come to Poland. 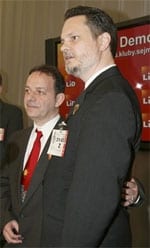 “After a meeting with left wing politician Ryszard Kalisz (below), head of the parliamentary committee on human rights in Poland, Brendan Fay and Tom Moulton , the two gays whose wedding images were used in a TV address by President Lech Kaczynski last week, have given a press conference in Warsaw. Asked why they came to Warsaw – a trip paid for by the private TVN TV station – the Irishman resident in New York, Brendan Fay, told journalists: ‘The [President’s] TV address misused our wedding images, which were used in such a way as to cause fear and intolerance. Our civil marriage was a day of beauty and joy and should not be used to promote intolerance…On March 18, when we first heard about this from a reporter from Radio Zet, my response was to write a letter and deliver it to the Consulate General in New York. The Consulate General has been kind and cordial in his dealing with us. And that was only the beginning [of the cordiality and kindness of the Polish people] which has continued till today. We would simply like to say that we are very happy to be hear and have felt welcomed since we have arrived.'”

Said Moulton: “And I want to reiterate that we feel comforted by the Polish people who feel badly how our images have been used. We come here in the hope of opening a dialogue with a community that may have not had much voice and that will make Poland a better place. The issue here is about equality.”

Fay and Moulton also wrote a letter to President Kaczynski asking for a meeting. 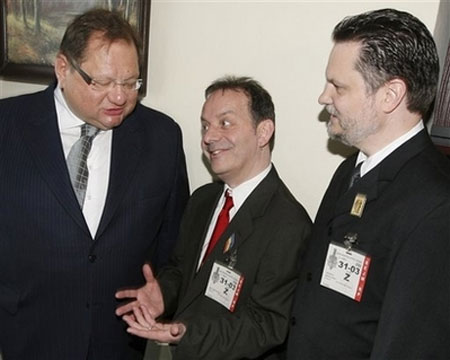