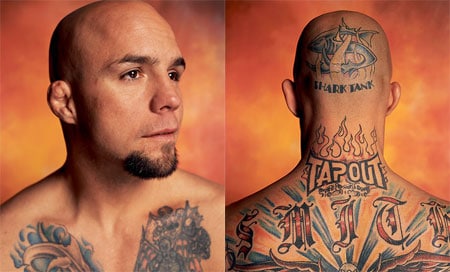 The New York Times magazine profiles ultimate fighter Shad Smith, who says he learned his craft as a response to how he felt the people around him might perceive him:

“…most of Smith’s childhood fights took place outside the ring, on the streets and at his instigation. He used to wear his hair in a mohawk as a tribute to the professional tag-team wrestlers the Road Warriors and prowl the neighborhood looking for fights. ‘I was just mad-dogging everyone’ — staring them down — ‘until somebody said something, and then I’d put my hands up and start fighting.’ He said he had 46 counts of assault and battery as a juvenile. ‘And that’s 46 counts posted on me. Can you imagine how many there actually were?’ I asked Smith why he spent so much of his youth looking for trouble. I expected some sort of clichéd, though possibly true, explanation — a difficult childhood or a Napoleon complex. What I didn’t expect him to say was, ‘You know, bro, the sexual-preference thing.’ Smith is gay, and I know of no other professional fighter who is openly so. ‘I was always scared that my mom and dad would find out and wouldn’t like me, and my brothers wouldn’t like me,’ he said. ‘I was petrified, because I didn’t want anyone to find out. And I would try to be the toughest person around. That way, no one would suspect, no one would ever say it, no one would think it.'”