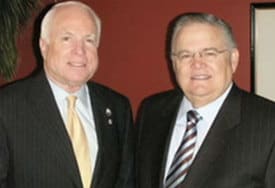 “McCain has attempted to distance himself from some of Hagee’s views, much as Barack Obama is doing in relation to Rev. Jeremiah Wright. But unlike McCain, Obama has not stood on stage with Wright and accepted his accolades this year. Interviewed by Deborah Solomon, Hagee refused to discuss his statement that Hurricane Katrina was God’s punishment for a gay rights parade in New Orleans, calling it ‘so far off-base.’ He claims, ‘Our church is not hard against the gay people. Our church teaches what the bible teaches, that it is not a righteous lifestyle. But of course we must love even sinners.’ He also said that charges that he had bashed the Catholic Church (‘false cult system,’ etc.) have been ‘grossly mischaracterized….I was referring to those Christians who ignore the Gospels.’ Asked what he thinks of Obama, he answers, ‘He is going to be difficult to beat, because the man is a master of communication. If he were in the ministry, he would make it in the major leagues overnight.'”

Hagee’s statements about Catholics and the U.S. support of a two-state Israeli/Palestinian solution, not to mention gays, have been widely condemned, yet McCain refuses to distance himself from him. In mid-March, McCain said: “I will say that he said that his words were taken out of context, he defends his position. I hope that maybe you’d give him a chance to respond. He says he has never been anti-Catholic, but I repudiate the words that create that impression.”

View the John Hagee-McCain clip, AFTER THE JUMP…