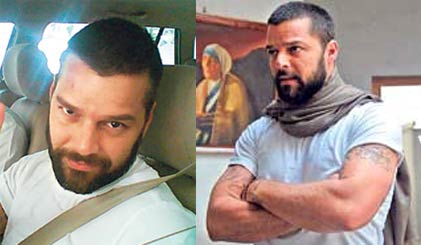 Don’t get too excited. Ricky Martin has been visiting Calcutta, India on a private humanitarian trip to the Sabera Foundation, which helps impoverished orphans and women who have been widowed or abandoned. He also paid a visit to Mother House and visited Mother Teresa’s tomb. He also extended another kind of humanitarian effort to one local who met him naked in the hotel sauna:

“This huge Ricky Martin fan actually had the good fortune of sharing a sauna bath with the singer at the Grand Oberoi hotel in Kolkata. Dutt shared his experience, ‘I was in the health club on Tuesday evening, when I saw this guy who looked so much like Ricky proceeding towards the sauna. I was not sure if it was him because he had a moustache and a beard. When I asked him if he was Ricky Martin, he smiled and said, ‘you have the wrong person’. He was nude. I noticed that he had a huge tattoo on his left arm and another one in the lower pelvic region. He had henna on his feet and a beaded anklet on his right ankle. He was extremely congenial. After about 30 minutes in the sauna, he wrapped himself in a towel and went out of the room…Soon he was back asking me to help him locate the keys of his locker room, which he had misplaced. Finally, he found them and said with a sheepish smile, ‘my mum always complains about my absentmindedness’. After he dressed and left, I was sure that it was Ricky and that he wanted to hide his identity. So I ran to him and asked for an autograph. He obliged and was extremely humble and friendly.”