Back in January I posted that a Tales of the City musical was in the works, driven by Avenue Q scribe Jeff Whitty and Scissor Sister Jake Shears. It appears the project is moving along swiftly: 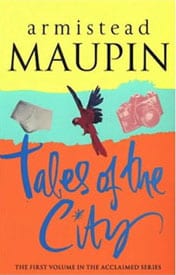 “Jason Moore (‘Avenue Q,” “Shrek’) will helm the show, which follows the idiosyncratic characters encountered by a young Midwestern woman in 1970s San Francisco. Produced by ‘Avenue Q’ producers Jeffrey Seller, Robyn Goodman and Kevin McCollum, ‘Tales of the City’ hopes to hit Broadway during the 2009-10 season. Budget for the developing show has not yet been determined, although creatives and producers expect a large-scale musical that, like the original book, follows the storylines of nearly a dozen major characters. Seller estimated capitalization would cost no less than $10 million. Plot of the musical will focus on the 1978 novel ‘Tales of the City,’ the first of seven ‘Tales’ books, with elements from the second novel likely included as well.”

Said Whitty: “Even now, it still feels like the future to me. I want the world to get to the place that we were in San Francisco in the 1970s.”