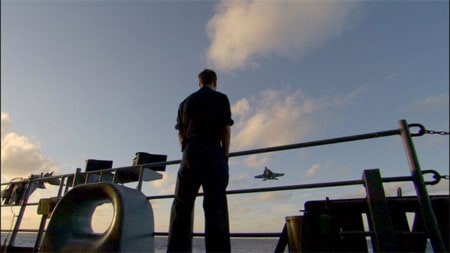 Carrier is a character-driven total immersion in the high-stakes world of a nuclear air craft carrier. A team of 17 filmmakers spent 6 months on the USS Nimitz on a full deployment to the Persian Gulf.

The 10-hour documentary series airs this Sunday-Thursday on PBS from 9-11pm ET (check local listings). I highly recommend you set your DVRs because if you have any curiosity about what goes on in the military, the trip you’re taken on aboard one of these floating cities is fascinating. The various episodes explore different people and aspects of life on the ship, touching on everything from shore leaves, to relationships aboard the ship, to ‘Don’t Ask, Don’t Tell’. 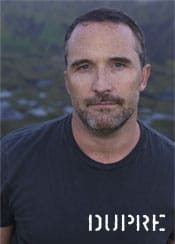 My friend and former college-mate Jeff Dupre is one of the producers of the series. He lived and breathed life on the Nimitz for six months, collecting hundreds of hours of footage of military life. I asked him a few questions about his experience.

What was it like to be on an aircraft carrier for 6 months?

It was amazing and also harrowing at times. A real endurance test.

Were there many gays and lesbians on the Nimitz?

On the way to the Gulf, we stopped in Hong Kong. I went to a gay bar there and it was like, ‘Hello, shipmates!’ The place was packed with sailors. So yeah, from what I observed, there were quite a few. It’s kind of an open secret. It’s totally apparent, but everyone pretends not to notice. Many of the gay and lesbian sailors and marines I met were out to their friends and co-workers on the ship and it seemed to not be a big deal. But they always have that threat hanging over their heads.

Was it a homophobic environment?

From my vantage point, yes, it was at times. But you know the men and women in I met on the Nimitz did not create the policy, just like they did not make the decision to invade Iraq. The President and Congress make these decisions and the men and women in the military must adhere to them. There were moments when I’d overhear people saying things that made my hair stand on end. Suddenly it was like I was back in high school but I just learned to roll with it. The film was not about me – it was about them. Of course, I was there for just six months. For gay and lesbian sailors, if someone you work with says derogatory things about gays, you don’t have any recourse. If you call them on it, you could lose your job. 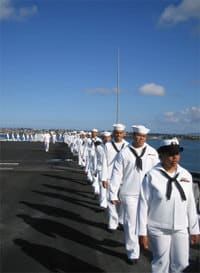 But having made friends with so many sailors and marines, I have to say that it’s a mistake to paint everyone in the military as homophobic. They’re not, but DADT sometimes makes it seem like they are. Another reason to get rid of the policy.

What amazed me the most about the Navy was the camaraderie. The sailors and marines form these really tight-knit family units on the ship, and they take care of each other. For some of them, it’s the only family they’ve ever known. So for me, the most tragic thing about DADT is that the gay and lesbian sailors on the ship are forced to lie about who they are and as a consequence they’re not able to really bond with and be supported by their Navy family in the same way that their straight shipmates can. You know, they probably were not out to their families at home, then they join the Navy to serve their country and are once again denied those family ties that we all need to get by. We honor the men and women who serve because of the sacrifices they make. To me, there’s a whole other level of sacrifice that gays and lesbians make when they sign up to serve their country. It’s discrimination plain and simple and I hope its days are numbered.

On Monday I’ll have another short interview with someone you’ll see onscreen in Carrier.

The opening of the first episode, AFTER THE JUMP…

Here’s a half-hour PBS special about the series: