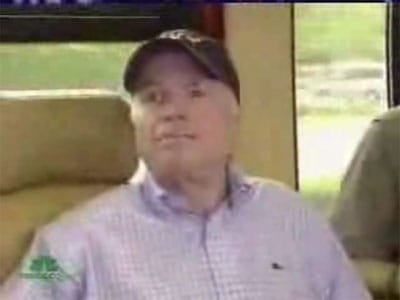 Yesterday in New Orleans, John McCain was asked repeatedly about the endorsement he accepted from anti-gay Pastor John Hagee, who has said that gay sin was responsible for Hurricane Katrina’s destruction of that city.

At one point on his tour bus, he snapped at a reporter, repeatedly calling the Hagee controversy “nonsense.” Watch it, AFTER THE JUMP…

Just after the exchange in the video clip above, McCain attempted to deflect the criticism by bringing up Reverend Jeremiah Wright. Said McCain “I didn’t attend Pastor Hagee’s church for 20 years. There’s a great deal of difference, in my view, between someone who endorses you, and other circumstances.”

Previous Post: « Harrison Ford Gets Chest Wax to Feel the Pain of the Forests
Next Post: Carrier: Jeff Dupre Talks About Life Aboard the USS Nimitz »