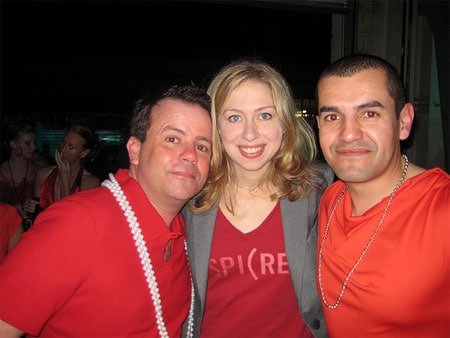 While in Portland, Chelsea Clinton made sure the gays got some attention, stopping in at the annual Red Dress Party, at which attendees must wear the required garment. It was probably, refreshingly, the first stop in recent weeks where she knew she wouldn’t be asked about the blue dress.

Byron Beck writes: “Not to be confused with that other annual “Red Dress” fundraiser, this is the “Red Dress Party,” a mondo-alcohol-fueled dance party where nearly 2,000 gay men in various states of red dress undress (and several nearly naked straight men as well as one very colorfully decorated naked woman) invade a warehouse in Northeast Portland and dance their collective asses off to pounding disco music and the incredible Storm Large and her Balls (they were beyond fabulous). Large, a bigtime Obama supporter even dedicated one of her more infamous songs, Ladylike, to Chelsea’s mama. According to my sources Ms. Clinton moved heaven and earth (well, she just trimmed some of her other meetings in Oregon Saturday that included stops in Eugene and Portland State University) so that she could make the par-ty.”

Adds Beck: “This small shindig was started years ago as a way for gay guys to wear girlie gowns and get stinkin’ drunk. But this much-loved party has evolved over the years. Now one of the most colorful fundraisers out there (last year the group gave away more than $25,000 to local nonprofits supporting queer youth or helping people with AIDS), it attracts over 1,500-plus attendees, including straight men and women, state legislators and anybody else who likes to rock on with their frock on.”