ESPN catches up with former NFL wide receiver Michael Westbrook, who is now retired and practices mixed martial arts. Westbrook blames much of his “disappointing career” on a remark that started a fight that somehow resulted in Westbrook being labeled gay: 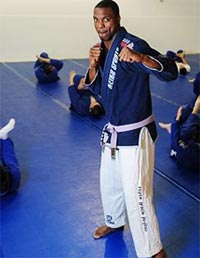 ESPN reports: “The video clips were all over the national news and Westbrook said the incident left a lot of people with the false impression that he was a homosexual. Westbrook said the details have been misreported for more than a decade. Fully content with his current situation, Westbrook rarely feels the need to reflect upon the highs and lows of his football career. ‘He didn’t call me a name,’ Westbrook said of Davis. ‘That’s where it gets mixed up. It got reported and it got changed into something monstrous. I was talking to him, Brian Mitchell and Terry Allen. They were talking about ‘letting us handle the team.’ I was like, ‘You all are a bunch of jealous [f—-]. You all are just jealous of everything I have.’ Stephen Davis told me I needed to shut up and all that stuff I was saying sounded like some gay [s—], like I’m soft, not like I’m gay. That’s all he said. It wasn’t like, ‘You’re gay,’ but it got changed to that really quick. So the connotation is Michael Westbrook is gay.’ The connotation has faded, but not completely. ‘My ex-girlfriend heard it about a year ago from this guy and she went nuts,’ Westbrook said. ‘Everybody that knows me knows that’s the farthest thing from the truth. For about three years, I wanted to lock myself in the house and never come out.'”

There’s no room for football in Westbrook’s heart [espn]