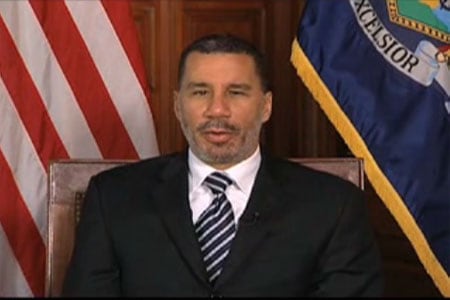 New York Governor David Paterson delivered a funny and eloquent video message (watch it) to the crowd at last night’s National Gay and Lesbian Task Force Leadership Awards dinner since he was being “held hostage” in Albany and couldn’t be there in person.

Joked Paterson: “If any of you can hear me, please contact the FBI or Interpol. I’m being held hostage in the dysfunctional Albany. I wanted to come to this dinner tonight. I’m actually tied to this chair and a gun is being pointed at my head. They’re trying to get me to reverse my opinions on a number of issues, but I won’t do it. If I am shot or killed during this interview, remember that I did the right thing.”

Paterson praised outgoing Executive Director Matt Foreman as well as former Governor Eliot Spitzer: “I am proud to have run on a ticket with Eliot Spitzer that became the first ticket in this country to actually advocate for marriage equality for all citizens and to win on that premise.”

He added: “Marriage equality in NY may not come just this moment but it is no longer an issue mostly for conviction, it is an issue for courage. People more and more understand that when people love each other they should express it in whatever way they deem necessary and possible. They should have all the rights that the rest of us have. And so, we willl push on and bring full marriage equality to New York State. And when we have done that, we’re going to do more. We’re going to protect young people from bullies. We’re going to protect against the discrimination of people in the transgender community, and we’re going to fight for decent and affordable healthcare for all citizens in this state. If you will join with me, and if we work hard enough, we can change the face of New York, which will be the catalyst to changing national policy.”

Watch Paterson’s clip, AFTER THE JUMP…