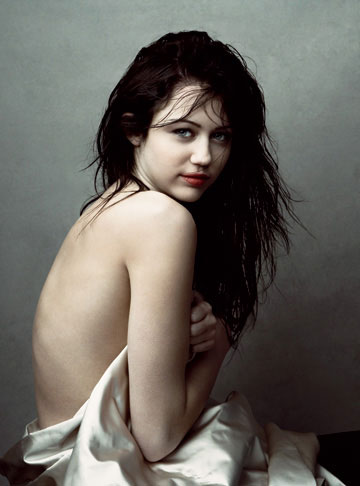 This is what makes a scandal? What’s prompting forced apologies is Disney’s fear that their billion-dollar Hannah Montana cottage industry is about to go down the drain. As evidenced by the Vanity Fair article, Miley Cyrus’ generation is much further along than her parents’ and their sexuality more fluid:

“Before I met Cyrus, an editor at a tabloid told me that all the celebrity weeklies have been ratcheting up their focus on her. With Lindsay Lohan rehabbed and Britney Spears under psychiatric care, the tabs are looking to Cyrus to flame out, or at least do something mildly outrageous. In December, some pictures made it onto the Net showing Cyrus and a girlfriend sharing what looks like a Twizzler and almost kissing, prompting a brief, halfhearted spate of ‘lezzie’ rumors. Silly. But still, I ask, did she feel betrayed that someone, presumably a friend, had posted the pictures? ‘It was me,’ she says, ‘on my MySpace. For me, I was like, Thatâs two girlsâitâs not a big deal. But they got spread around. Like someone copied and pasted and said, Omigod, look at this, and blah blah blah. I was just like it didnât affect me. Everyoneâs like, Maybe sheâll learn her lesson this time. Nope.’ If she had been chewing gum, this could have been nicely underscored with a snap.”