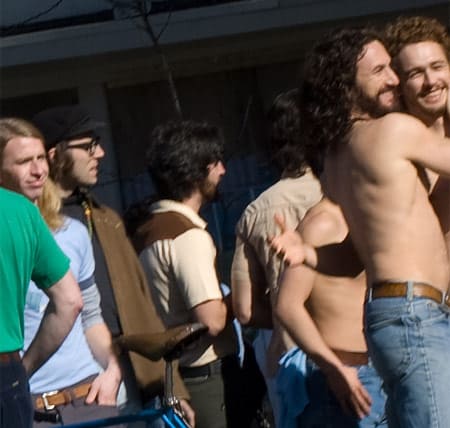 Says Franco, who plays Penn’s lover Scott Smith in the upcoming Milk: “The top! He’s a little hairier than those other ones, but oh well…”

Of Milk in general, Franco says: “It’s hard to think of a director or actor who I regard more highly than [Gus van Sant and Sean]. Gus has been a hero of mine since Drugstore Cowboy and My Own Private Idaho. And of course Sean is probably the best actor around. It was great. Surprisingly kind of comfortable and easy. Gus has a very soft-spoken, soft-handed approach, so he just brings everybody together, the right elements together, and then he doesn’t really have to do much. It just kind of happens. At least that’s how it feels…I know the two main questions I’m going to be asked in the next year are (referring to his role in Judd Apatow’s Pineapple Express) ‘How much pot did you smoke?’ and ‘What was it like to kiss Sean Penn?’