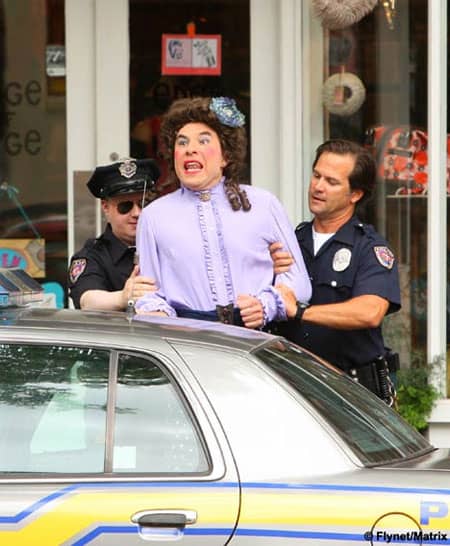 I mentioned that HBO was adapting Little Britain for American audiences back in 2006 but I hadn’t heard much until now. 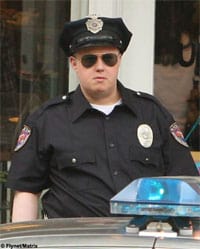 The Daily Mail posts some photos of Lady Emily Howard being arrested on the streets of the Big Apple and reports on the show’s progress:

“David’s cross-dressing character – famous for her ‘I’m a laydee’ catchphrase – is manhandled by his sidekick Matt Lucas, and a hunky US cop for shoplifting in new pictures from the US version of the show. The award-winning comedy duo are introducing a number of new characters in addition to keeping the old favourites. Walliams also unleashed a new middle-aged Barbara Woodhouse-style dog trainer character. Last week the pair revealed Lucas’ American schoolgirl Ellie Grace and Walliams as her mother. While other new characters have yet to be revealed, die-hard fans of the past three series will not be disappointed by the latest. They can expect to see the return of Dafydd “only gay in the village” Thomas, camp Prime Minister’s aide Sebastian Love and Asbo teen Vicky Pollard. Walliams and Lucas started filming in North Carolina last month and are apparently looking for an American film star to play the role of a comedy US president. Hollywood heartthrob George Clooney is rumoured to be their first choice.”

AFTER THE JUMP, an Emily Howard clip featuring Robbie Williams for those of you unfamiliar with the show…