The definition of the word “spouse” appears to be at the center of a tangle between House speaker Nancy Pelosi and the Pentagon over allowing Wisconsin Rep. Tammy Baldwin’s partner Lauren Azar to travel with her in official situations similar to other congressional spouses. 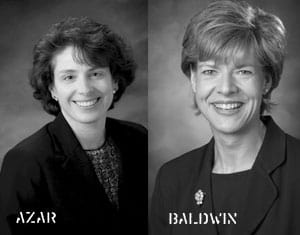 Politico reports: “Under House guidelines, members of Congress may take their spouses with them on military flights if there is room for them and when it is ‘necessary for protocol purposes.’ Although Baldwin, the only openly gay woman elected to Congress, exchanged wedding vows with Lauren Azar in 1998, her home state of Wisconsin does not officially recognize same-sex marriages, and military officials were apparently unwilling to consider Azar a ‘spouse’ within the meaning of the House guidelines. In appealing to [Defense Secretary Robert] Gates, Pelosi aides said their boss was simply asking the defense secretary to follow a precedent established by her predecessor, former Republican Rep. Dennis Hastert of Illinois. Pelosi told Gates that Hastert had allowed Baldwin to take Azar on a previous trip abroad. Gates, who was apparently unaware of any earlier trips, told the speaker that she was responsible for the House travel rules and had the authority to make an exception, according to officials on and off the Hill. His only requirement was that Pelosi send him a letter authorizing the trip. Pelosi sent such a letter moments after the phone call ended, and Azar was allowed on the plane.”

While some suggest that the military is uneasy about the use of its planes in a situation that would be legitimizing a same-sex relationship while it still treats its employees according to the ‘Don’t Ask, Don’t Tell’ policy, Rep. Barney Frank believes it has more to do with the Bush administration’s policy in other areas.

Says Frank: “I think the military was following orders. I think the administration disapproves of same-sex marriage.”