A new play about Alan Turing recently debuted at New York’s Ensemble Studio Theatre Company’s First Light Festival. Pure, by A. Rey Pamatmat, explores the relationship between Turing’s work and personal life. During World War II, Turing, who is known as the father of modern computing, devised the Turing Bombe, a codebreaking device that was used to decipher the Nazi enigma codes, up to 3,000 messages per day. 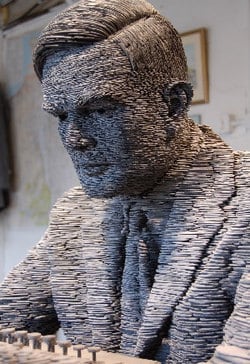 He was also gay, and two years after being convicted of “gross indecency” and sentenced to undergo hormone therapy, he killed himself with a cyanide-laced apple.

, which suggests that Turing’s passion for science was fueled by his homosexual love for a childhood friend, Chris, who died from tuberculosis when Turing was a teenager. Pure suggests that Turing may have turned his attention to artificial intelligence—a field that explores, at its core, the meaning of life—to celebrate Chris’s life and let it live on in his work. In almost every scene, Turing has a brief conversation with the dead Chris; it later becomes clear that the entire play is set in the hazy moments before Turing’s death, when he is hallucinating or perhaps communicating with Chris’s spirit in the afterlife. Pamatmat, who wrote Pure for the Ensemble Studio Theatre’s annual First Light Festival, paints Turing as a wonderfully brazen character. The mathematician was openly gay at a time when homosexuality was a criminal act in England; in one scene, Turing admits to his fiancé—three days after proposing to her—that he has ‘homosexual tendencies.’ (Pamatmat says this conversation really happened.) Pure suggests that Turing’s insolence dances the fine line between bravery and foolishness; though he was eventually caught and forced to take estrogen supplements to curb his libido, he never doubted himself or his sexual choices. ‘A lot of his greatest work came from his being different,’ Pamatmat says. ‘That’s why he was really able to blaze the trail.'”