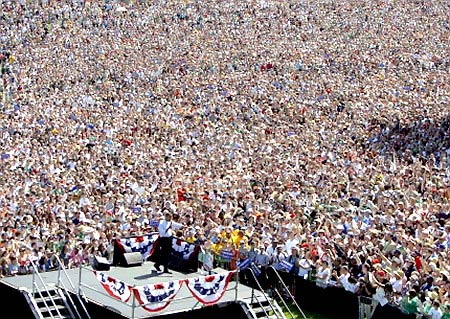 Although Tuesday’s primary could give Obama a majority of pledged delegates, the campaign reportedly won’t be declaring a victory in the nomination that night.

The Clinton campaign was also in Oregon over the weekend, the NY Times reports: “Bill and Chelsea Clinton also were in Oregon on Sunday, campaigning on behalf of Hillary Rodham Clinton in Salem. ‘Don’t you let anyone tell you she can’t win,’ Mr. Clinton said. ‘You can still make your voices heard.’ … ‘In wrapping up the case for his wife, Bill Clinton did not criticize Obama, who is heavily favored to win in Oregon on Tuesday,. writes The Oregonian. ‘Instead, he directed his sharpest comments at the news media, citing what he said were recent studies that concluded that the Democratic primary campaign had been the subject of ‘the most biased, one-sided media coverage in the history of American politics.’'”

Check out a clip of Obama’s massive rally, AFTER THE JUMP…

Previous Post: « Queer As Folk‘s Gale Harold Hits Desperate Housewives
Next Post: Sam Sparro On Being Gay: ‘This is Me, I’m Happy with Myself’ »