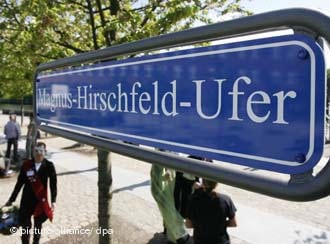 Yesterday, on the 75th anniversary of the day Nazis broke into his offices and burned hundreds of books, Berlin dedicated a stretch of the Spree River to sex researcher and gay rights activist Magnus Hirschfeld. 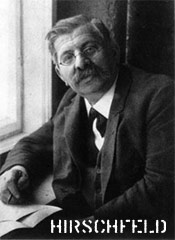 Deustche Welle reports: “Hirschfeld had founded the world’s first institute dedicated to fighting discrimination against homosexuals. He went into exile in France and died there in 1935. The stretch of river bank named after Hirschfeld is near his former institute. According to Germany’s Lesbian and Gay Association (LSVD) and the Mitte district of Berlin, where ‘Marcus-Hirschfeld-Ufer’ is located, a bronze monument to Hirschfeld will also be erected along the river. The Charite hospital also commemorated Hirschfeld with an exhibition which opened on Tuesday at its Medical Historical Museum. Called ‘Sex Burns,’ the exhibition focuses on Hirschfeld’s work and his persecution by the Nazis.”

Alexander Zinn, head of Germany’s Lesbian and Gay Association, called the dedication “a first step in the right direction” in acknowledging gay persecution by the Nazi regime.