“‘You know what I want to do?’ Hagan said smiling in front of a crowd of supporters in Greensboro. ‘I want to give Miss Liddy Dole a pair of ruby red slippers and let her click her heels three times and go home to Kansas with Bob.’ Hagan had 62 percent of the vote with 25 percent of precincts reporting. Chapel Hill entrepreneur Jim Neal was running second with 19 percent.” 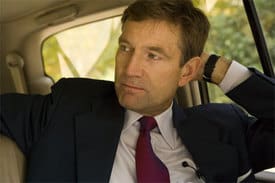 “Kay Hagan celebrated her victory in Tuesday’s U.S. Senate primary with an invitation. The state senator from Greensboro, who moves from an easy primary win to what promises to be a grueling general election matchup against incumbent GOP Sen. Elizabeth Dole, implored supporters of former rival Jim Neal to join her ranks. ‘I want to invite them to come on board, and I certainly need their support,’ Hagan said. Neal immediately obliged, vowing to do whatever he can to help a candidate he had harshly criticized for months win in November. ‘Elizabeth Dole’s in for the race of her life,’ said Neal, who finished a distant second. ‘This could be in the year in which Sen. Dole can be beaten, and Kay has my full support as the nominee to do that.’ Hagan has said she needs about $10 million to unseat Dole – about seven times more than she has raised thus far. The $1.5 million she raised for the primary was plenty to push her past four opponents – she grabbed 60 percent of the vote, according to unofficial results.”