You may remember back in December I posted that the Boy Scouts would be evicted on June 1st from the Philadelphia building they’ve been renting for $1 a year since 1928 because the city is forcing them to abide by its non-discrimination policies and the Boy Scouts continue to refuse to open up their membership to gays. 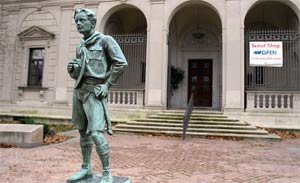 Well, the Scouts aren’t having it and they’ve filed a lawsuit against the city to avoid paying the $200,000-a-year rent the city will soon begin charging them to occupy the landmark property:

“The federal suit filed Friday accuses the city of censorship for targeting the Scouts but maintaining free or nominal leases with other groups that limit membership, such as Baptist and Roman Catholic church groups and The Colonial Dames of America. The U.S. Supreme Court ruled in 2000 that the Boy Scouts, as a private group, have a First Amendment right to bar gays. But the policy has had consequences, with municipalities, charities and donors withholding support. ‘We will not allow discrimination in providing services on city property,’ Philadelphia Mayor Michael Nutter said Tuesday. A 1982 city ordinance bans discrimination based on sexual orientation and other grounds. ‘We’re not punishing them for not admitting homosexuals,’ City Solicitor Shelley Smith said. ‘But they can’t get free rent and violate our policy.’ Smith said the city was unaware of any discrimination by other groups with city-subsidized space, but that it would investigate any complaints.”