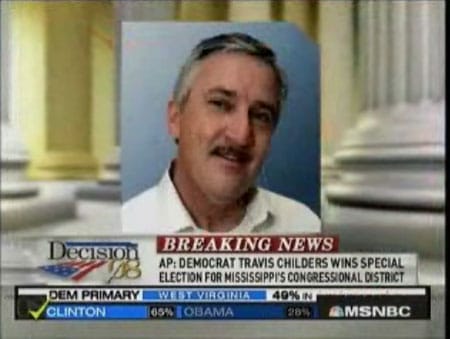 A bellwether for November?

A stunning win for Democrat Travis Childers in the 1st congressional district in Mississippi, where Cheney and Huckabee campaigned for Republican Greg Davis.

AP: “It happened again Tuesday, as Travis Childers beat Greg Davis in a special election to replace Republican Roger Wicker, who served in the House since 1994 and was appointed to the U.S. Senate to fill the seat vacated by Trent Lott. Childers’ win will give him the chance over the next several months left in the seat’s two-year term to build a fundraising and publicity advantage as he heads into November’s general election. He will again face Davis, as well as two other opponents. Childers’ win gave Democrats a 236-199 edge over Republicans in Congress.”

Added Chris Matthews: “It’s like the Democrats losing in Brooklyn…”

Watch the analysis by Olbermann, Russert, Matthews, and Huckabee, AFTER THE JUMP…