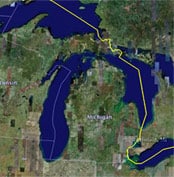 According to the Detroit Free Press, “An amendment to the state constitution approved by voters in 2004 to define marriage as the union of one man and one woman also prohibits public employers from providing health care and other benefits to the same sex partners of employees, a divided Michigan Supreme Court ruled today.The court majority found that language in the amendment prohibiting recognition of other unions ‘for any purpose’ included the extension of benefits to gay and lesbian partners of public employees. Several Michigan universities, including U-M and MSU, along with various municipal and school employers had offered the benefits as a means of attracting workers.”