Reverend Arthur Mallison, a longtime priest with the Diocese of Dallas, was forced to resign two weeks after taking a position at St. Michael’s in McKinney, Texas after his association with a now-defunct website in 2001 was exposed by church members campaigning against him. 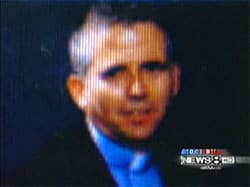 WFAA reports: “The Diocese of Dallas said Father Arthur Mallison has done nothing that violates church policy, but e-mails have circulated about a picture of the priest that appeared on a website set up as a support site for homosexual clergy. The site is called St. Sebastian’s Angels and was created in 1999. ‘There was a faction in the parish that had started a nationwide campaign to put pressure on Father,’ said Annette Gonzales-Taylor, a Diocese of Dallas spokesperson.”

According to the Dallas Morning News, ” Father Mallinson’s involvement with the site, which is defunct, briefly made news reports in 2002. He told the diocese he had contributed to the site – which included his photo – when its purpose was to support gay priests in a celibate lifestyle but stopped in 2001 after others began posting pornographic material, Ms. Taylor said. Ms. Taylor said Father Mallinson remains a priest in good standing and will be in contact with the dio- cese about another assignment.”

Previous Post: « What has happened to Colin Farrell?
Next Post: I Love You Phillip Morris Billboard Up in Cannes »