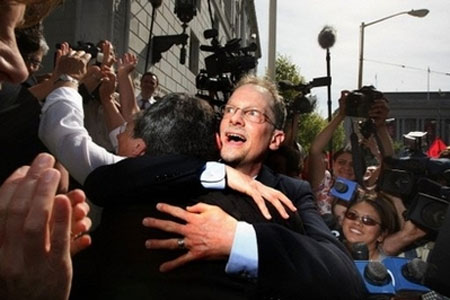 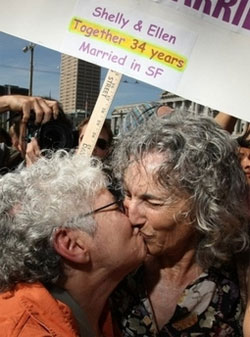 “Barack Obama has always believed that same-sex couples should enjoy equal rights under the law, and he will continue to fight for civil unions as President. He respects the decision of the California Supreme Court, and continues to believe that states should make their own decisions when it comes to the issue of marriage.”

“Hillary Clinton believes that gay and lesbian couples in committed relationships should have the same rights and responsibilities as all Americans and believes that civil unions are the best way to achieve this goal. As President, Hillary Clinton will work to ensure that same sex couples have access to these rights and responsibilities at the federal level. She has said and continues to believe that the issue of marriage should be left to the states.”

“John McCain supports the right of the people of California to recognize marriage as a unique institution sanctioning the union between a man and a woman, just as he did in his home state of Arizona. John McCain doesn’t believe judges should be making these decisions.”

“Regardless of whether one supports or opposes same sex marriage, the decision to recognize such unions or not ought to be a power each state exercises on its own, rather than imposition of a one-size-fits-all mandate by the federal government (as would be required by a Federal Marriage Amendment which has been previously proposed and considered by the Congress). The decision today by the Supreme Court of California properly reflects this fundamental principle of federalism on which our nation was founded…Indeed, the primary reason for which I authored the Defense of Marriage Act in 1996 was to ensure that each state remained free to determine for its citizens the basis on which marriage would be recognized within its borders, and not be forced to adopt a definition of marriage contrary to its views by another state. The decision in California is an illustration of how this principle of states’ powers should work.”

And a bonus reaction, your Speaker of the House, Nancy Pelosi:

“I welcome the California Supreme Court’s historic decision. I have long fought against discrimination and believe that the State Constitution provides for equal treatment for all of California’s citizens and families, which today’s decision recognizes. I commend the plaintiffs from San Francisco for their courage and commitment. I encourage California citizens to respect the Court’s decision, and I continue to strongly oppose any ballot measure that would write discrimination into the State Constitution. Today is a significant milestone for which all Californians can take pride.”