The White House and conservatives are furious at the revelations unleashed in former Press Secretary Scott McClellan’s memoir, which has zoomed to #1 on Amazon 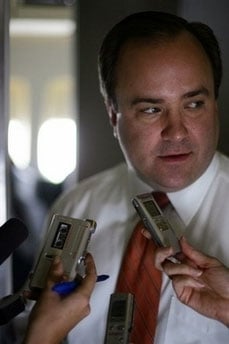 Via Think Progress: “Current Press Secretary Dana Perino said McClellan was obviously ‘disgruntled,’ while Fleischer said he was ‘heartbroken,’ and Bartlett called the book ‘total crap.’ MSNBC’s Kevin Corke reported this afternoon that White House officials, on background, went even further, calling McClellan a ‘traitor’ and likening him to Benedict Arnold. He said the White House was ‘upset,’ substituting that word for a word he said he could not repeat on television.”

The truth is sometimes hard to hear, eh?

One thing that came out in McClellan’s Today show appearance today was that Bush authorized the selective leak of the NIE. McClellan said he confronted Bush about it: “I talked about the conversation we had. I walked onto Air Force One, it was right after an event we had, it was down in the south, I believe it was North Carolina. And I walk onto Air Force One and a reporter had yelled a question to the President trying to ask him a question about this revelation that had come out during the legal proceedings. The revelation was that it was the President who had authorized, or, enable Scooter Libby to go out there and talk about this information. And I told the President that that’s what the reporter was asking. He was saying that you, yourself, was the one that authorized the leaking of this information. And he said “yeah, I did.”

Watch TWO CLIPS, a news report on the White House reactions and selections from McClellan’s Today show appearance, AFTER THE JUMP…