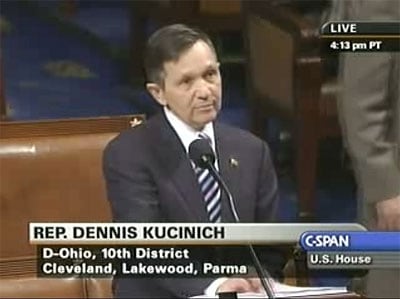 “The Ohio representative outlined his intention to propose more than two dozen charges against Bush on the floor of the U.S. House of Representatives. Kucinich, a former presidential candidate, accused Bush executing a ‘calculated and wide-ranging strategy’ to deceive citizens and Congress into believing that Iraq posed an imminent threat to the United States. House Speaker Nancy Pelosi has repeatedly said she opposes trying to remove the Republican president who leaves office next January because such an attempt would be divisive and most likely unsuccessful.”

“Most likely unsuccessful” seems to be the key phrase in Pelosi’s tenure thus far.

As such, the move is not likely to gain traction, but you can watch the clip AFTER THE JUMP…