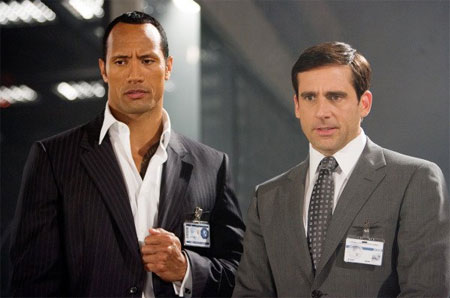 Steve Carell and Dwayne “the Rock” Johnson applauded their own courage for locking lips for the upcoming feature Get Smart in an interview with the AP:

Said Carell: “The Rock has softer lips. I guess I could say that. He smells like strawberry shortcake. For me, that’s why they call him The Rock. He rocks people’s worlds…He is such a good guy. We just laughed that whole day. That was a total no-brainer in terms of that scene. There was never one moment of hesitation or awkwardness. He’s game for anything, let me put it that way.”

Said Johnson: “It was just one of those things where I thought well, you know, ‘What could be the most entertaining and funniest moment that we could think of that would still make sense and still kind of root in reality?’ We came up with a great kiss. ‘I thought if Jake Gyllenhaal can do it, Will Smith can do it, then I can do it, too. I’m going to own it. I was like, ‘Give me those lips right now. Right now.'”