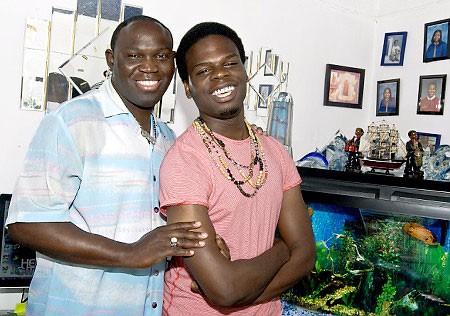 The New York Daily News reports on a notable graduate from Medgar Evers College in Brooklyn. Albert Smith (left), who started the school’s first gay and lesbian club, was the target of frequent homophobic slurs for doing so but was cheered as he collected his diploma:

“‘I made a mark for myself and the college, too,’ said Smith, 29, who lives in Flatbush. ‘It was the greatest feeling in the world to know I had so many supporters.’ Smith’s popularity at Medgar Evers didn’t happen overnight – nor did support for the Life Club, the first school-sanctioned gay and lesbian awareness group in the college’s 38-year history. Comprised mainly of Caribbean-American and black students, the college is rampantly homophobic, said Smith and other openly gay students at Medgar Evers. Club President Lamont Joseph (right), 22, helped create the group three years ago, but the club was only sanctioned in July. At the first meeting, only Joseph and another student were present, but fears of harassment caused Medgar Evers to station a security guard outside just in case. ‘People weren’t always welcoming, but the staff was,’ said Joseph, who still attends the school. In one case, a belligerent student confronted Joseph at a club fair at the school, grabbed candy the group was handing out and threatened harm if the group continued. School officials said they were fully supportive of the group – it now has about 30 members – but acknowledged that bigotry on campus was rampant.”