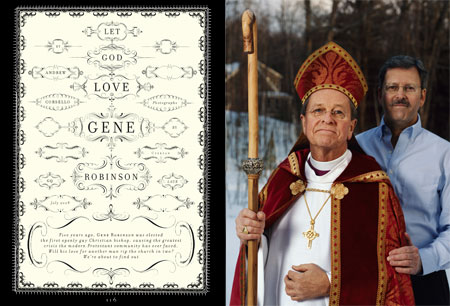 GQ has published a lengthy profile (maybe the best I’ve read) on gay Episcopal Bishop Gene Robinson, who recently entered into a civil union with his partner Mark Andrew. Here’s just a tiny bit, about Robinson and his former wife, Isabella Martin, known to him and others as Boo:

“The day they divorced, Gene and Boo knelt before the altar, asked for each other’s forgiveness, and pledged themselves to the joint raising of their children. Then they re-exchanged their rings, as symbols of the vows to which they no longer held each other. He still has hers, and she his. ‘One thing I say to couples in premarital counseling is that the church isn’t kidding when they say this is forever,’ he says. ‘Even if you’re divorced in less than a year and you don’t see them for the rest of your life, you’ll always be emotionally connected to this person. I say this because I know. Boo and I divorced in 1986, and I still love her.’ By the time Gene Robinson ended his marriage and came out of the closet, New Hampshire’s Episcopalians had known him for eleven years. They were shocked but, with a few exceptions, not up in arms. The man had brought love, transparency, and the truth as he knew it to their children and their families for more than a decade. Why would he stop now?”