GLAAD issued a “call to action” this week over FX Networks’ Morgan Spurlock series 30 Days from In the episode, which aired last night (and is scheduled to repeat in NYC on Friday night), a woman who opposes gay and lesbian parents and their families lives for 30 days with gay parents Dennis and Thomas and their four adopted sons. 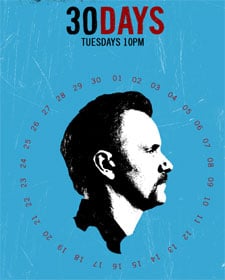 The episode also airs a disgusting statement from Peter Sprigg of the Family Research Council (watch it, AFTER THE JUMP). Says Sprigg: “Homosexuality is associated with higher rates of sexual promiscuity, sexually transmitted diseases, mental illness, substance abuse, domestic violence, and child sexual abuse, and those are all reasons for us to be concerned about placing children into that kind of setting.”

Writes GLAAD: “While there is no credible scientific research that backs Sprigg’s claim – and much that disputes it – the episode presents his assertion as if it were fact and offers no credible social science experts or child health authorities to challenge Sprigg’s assertion. Indeed, the American Academy of Pediatrics, the American Psychological Association, the Child Welfare League of America, and many other child health and social services authorities who support parenting by qualified lesbian and gay parents dispute Sprigg’s claim.”

I’ve posted about Sprigg before. You may remember that back in March, Sprigg talked about immigration to the Medill Reports, saying, “I would much prefer to export homosexuals from the United States than to import them into the United States because we believe homosexuality is destructive to society.”

Dan Savage, who watched the show and knows the family portrayed, had this to add: “I happen to know the gay couple featured, Tom and Dennis Patrick, and their four boys. Every summer my family attends Gay Family Week in Saugatuck (not just me and the boyfriend and the kid, but my whole extended family), as do the Patricks. Tom and Dennis are great, mellow, thoughtful guys who’ve adopted four boys out of foster care. The state of Michigan, which should be pinning a medal on these guys, has instead threatened to take away their health-care benefits in the wake of an anti-gay marriage amendment to Michigan’s state constitution.”

Watch the clip in question (via Joe.My.God), AFTER THE JUMP…