Troubling reports in a release just sent out by Ambiente:

“Today, June 25th, starting at ten o’clock, the first ever Cuban Gay Pride march under the slogan ‘You are not alone’ attempted to take place in Havana for the liberation and respect of sexual diversity in Cuba, but as organizers arrived at the scheduled starting point, several of them were met by Cuban police, who beat & arrested several of them.” 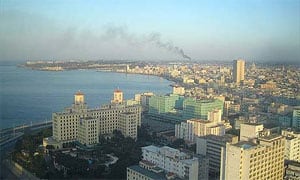 According to Ambiente, The Cuban Commission on Human Rights for people with HIV and Sexual Races, the Cuban League against AIDS, Elena Mederos Foundation, The Foundation LGTB Reinaldo Arenas in Memoriam, Elena Mederos Foundation, the Cuban Movement for Gay Liberation, the Havana Transsexual Collective, Havana LGTB Cultural Center and the Organization of Gay Political Presidio Reinaldo Arenas were all expected to participate in the march.”

It was to begin in the “Don Quixote” park in the neighborhood of Vedado and march to the Ministry of Justice “with the goal of delivering their demands to the Castro government,” according to Ambiente. Demands included the cessation of violence and repression against Cuban homosexuals, and an apology to the Cuban people for the introduction in the 60’s of UMAP concentration camps (Military Units to Aid Production) that were created by the dictator Fidel Castro, to suppress and punish homosexuals and the religious youth who opposed his Marxist ideology.

The Guardian reported on the planned march earlier today.

Cuba’s Catholic Church yesterday protested the government’s growing openness on gay rights in an editorial in Palabra Nueva, the monthly magazine of the Archdiocese of Havana, which said “Respect for the homosexual person, yes. Promotion of homosexuality, no.”

There is a press conference scheduled for 5:30pm today at which details about this morning’s incident will be provided.

UPDATE: The Sun-Sentinel has reports of an arrest, but not much more information aside from that the march was cancelled before it began.