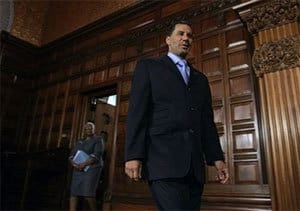 “Governor Paterson, they contended, has ‘seized the Legislature’s authority, and overridden the will of the people.’ A spokeswoman for Mr. Paterson said the governor’s office had not yet received the legal papers and could not comment on the case. A spokesman for the Senate Republicans said on Tuesday that it was unlikely they would do anything as a group to block Mr. Paterson. “It’s obviously something the courts may take a look at. Whether we do something, that’s looking less likely,” the spokesman, John C. McArdle, said. Even though they have a majority in the Senate, the Republicans’ hands are essentially tied because the Democratic-controlled Assembly would not approve a bill that seeks to ban gay marriage.”

Said Donna Lieberman, executive director of the New York Civil Liberties Union: “This is a lawsuit that’s not going anywhere. The governor is doing what a governor should do, which is direct his agencies to comply with the law. He’s not circumventing anything. He’s not doing anything that violates the law.”

Once again, David Paterson’s press conference on the directive, AFTER THE JUMP…