That statement that McCain made late yesterday to the Protect Marriage Campaign (“I support the efforts of the people of California to recognize marriage as a unique institution between a man and a woman, just as we did in my home state of Arizona. I do not believe judges should be making these decisions.”)? 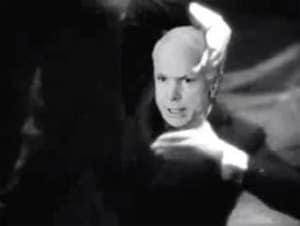 It was the fulfillment of a promise he made earlier in the day to “several influential social conservatives” (right-wing Evangelicals?) that he would pander to them:

“McCain, the presumptive Republican presidential nominee, told the small assembly that he was open to learning more about their opposition to embryonic stem cell research despite his past disagreements with them on the issue. And, according to participants, he indicated that he would take seriously their requests that he choose an anti-abortion running mate and would talk more openly about his opposition to gay marriage — a pledge he carried out later in the day by endorsing a ballot measure in California to ban gay marriage.”

Apparently there were “changed hearts” after the meeting. But it doesn’t stop there: “McCain is scheduled to fly Sunday to Asheville, N.C., to meet privately with the Rev. Franklin Graham, son of Billy Graham. The younger Graham met this month with McCain’s rival, presumptive Democratic nominee Sen. Barack Obama, who has launched his own effort to court skeptical evangelical leaders. McCain told the activists Thursday that he also hoped to meet with James C. Dobson, founder of the influential group Focus on the Family, who has said he would not vote for McCain.”