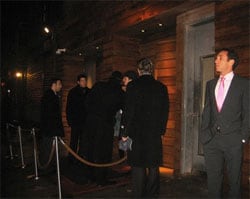 “Early Wednesday morning (June 18th, 2008) at approximately 2:30AM – two individuals were attacked by a man inside 1 OAK. and were called ‘faggots’ – victim number 1 had to be rushed to the hospital due to massive blood loss. Victim number 2 had no visible wounds at the time. Victim number 1’s friend wanted to call 911, however the two owners of the nightclub, Sartiano and Akiva, told the friend NOT TO. 911 was called regardless. The club owners then wanted to rush the victim into a car when they knew the ambulance was coming. A minute goes by and the attacker was able to walk right out of the club, without security questioning or anyone’s interference, even after the victim’s friend screamed out ‘that’s the guy!’ The attacker turns out to be someone that frequents the club often and knew the doorman and the staff, since he was able to walk right into the club and said hello to the doorman in the beginning of the night.”

The nightclub’s PR agency says that “the situation that occurred at 1OAK was out of the establishment’s control” and that the management is cooperating.