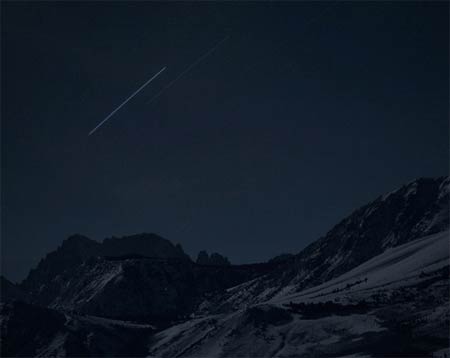 Wired reports: “To capture his images, the researcher and ‘experimental geographer’ employs a motorized mount with various combinations of telescopes and digital and large-format film cameras. Paglen uses spy-satellite data compiled by Ted Molczan — a renowned amateur astronomer profiled by Wired magazine in 2006 — to predict where a given ‘black satellite’ will be in the sky. Then he decides how he wants to compose the image. ‘I’ll find where a star will be in the compositional plane,’ he says. ‘Then I’ll use one telescope, which is attached to a webcam, to focus on that star.’ With the help of a computer program that controls the mount of the telescope and keeps it focused on the heavenly body, Paglen says he can get the telescope to swivel with the Earth’s rotation. He then uses another telescope attached to a high-end digital camera for his deep-sky shots, similar to the rig he used for his desert shots. ‘I’ll see the satellite in the sky, kind of know where it’s going to be in the frame, then I’ll open the shutter and take a long exposure of the satellite passing through.'”