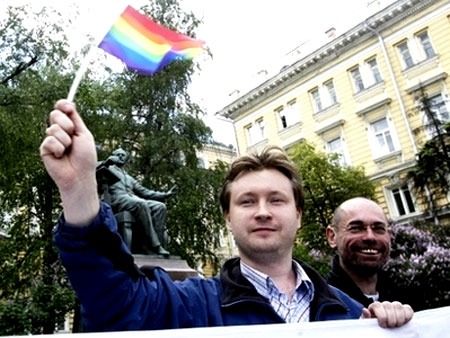 “The annual pride demonstration had been outlawed by… Luzhkov, who has dubbed gay pride events “Satan’s work,” reflecting a strain of Russian society that remains suspicious of liberal values. A police spokesman told AFP 36 people had been arrested at the event at which Russian Orthodox and far-right opponents hurled eggs at gay activists and, in one instance, were seen punching a gay man to the ground. Those arrested were mainly opponents of the pride event rather than gay activists — suggesting police were keen to minimise trouble rather than strictly enforce the ban. The demonstration started with about 25 people gathering by a statue of 19th century Russian composer Pyotr Tchaikovsky, widely considered to have been gay. ‘We came to bow before this great composer in this most symbolic place in the capital,’ gay rights leader Nikolai Alexeyev told the demonstrators. ‘It is more symbolic than the building where the country’s greatest homophobe sits,’ said Alexeyev, head of the Gay Russia organisation, referring to the Moscow mayor.”

UK Gay News has a small photo gallery of the proceedings.

Below, an activist is attacked, and one of the attackers is led away by police: 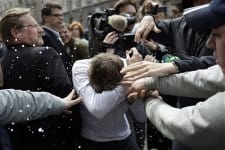 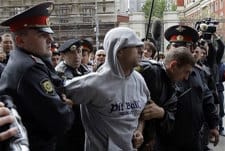 A second event occurred when four activists blockaded themselves in an apartment in front of City Hall that read “Rights to gays and lesbians – homophobia of mayor Luzhkov to be prosecuted”. Police spent a great deal of time trying to break into the apartment where the activists were located, and reportedly threatened to plant drugs on them and arrest them when they finally broke in. They eventually forced the door open, arrested the activists and held them in a cell overnight.

The entire incident is liveblogged here. The banner is pictured below: 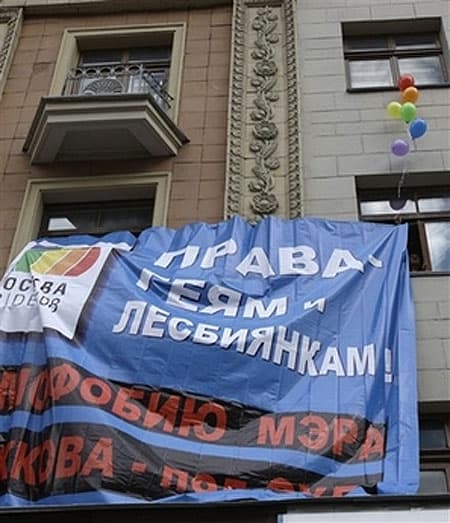 AFTER THE JUMP: Two clips, one of the demonstrations in front of the Tchaikovsky monument and the other of the banner on the street opposite City Hall.