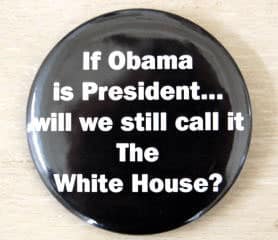 On sale at a booth hosted by Republicanmarket at the Republican state convention in Texas.

“‘Republicans will make a fundamental if not fatal mistake if they seek to win the election by demonizing Barack Obama,’ Huckabee told reporters in Tokyo, according to a report by Agence France-Presse. Huckabee praised the country for getting ‘to a point where we did not see his color but we truly saw his charisma, his message and what he brought to the campaign trail…When people are really hurting — and they are right now — they’re not looking at a person’s race,’ he added.”