Oklahoma County Commissioner Brent Rinehart, who sent out a 16-page comic book to voters that mocked gays as well as his political opponents, came in last in a three-way primary race on Tuesday. 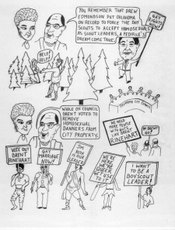 “On Tuesday, Rinehart was tossed out of office by voters in his district, finishing third in a three-way primary with 1,900 votes, or 21 percent. ‘I’ve been battling and battling for many years, and I believe even though I still had some fight left in me, I don’t believe the public had it left in them,’ Rinehart said Tuesday night. ‘I don’t in any way blame them.’ Brian Maughan, 31, a political consultant and former county employee, garnered 4,238 votes, or 47 percent. Former Bethany Mayor J.D. Johnston had 2,808 votes, or 32 percent, enough to force an Aug. 26 runoff election with Maughan. The winner of that runoff will face Harrah Democrat Jim Dickinson, who captured 54 percent of the vote in a three-way Democratic primary.”

Losing the primary won’t mean Rinehart’s schedule is empty, though: “Rinehart is scheduled to appear at an Oklahoma County District Court hearing on Thursday in connection with several felony campaign corruption charges he’s facing in connection with his previous campaign.”

Previous Post: « Second Anti-Gay Assault at Stockholm Europride in a Week
Next Post: Antonio Sabato Jr Can’t Decide if He’d Choose To Be Gay or Stupid »