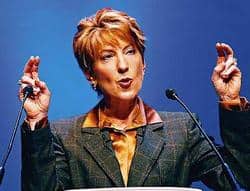 Two articles I read while flying back and forth to my grandma’s 90th birthday party in Michigan bolster my gut feeling that McCain might be strongly considering a woman as his veep.

First, in Condé Nast Portfolio, ousted Hewlett-Packard CEO Carly Fiorina—who’s already been working for McCain as a tech and economic (!) advisor—is floated as a potential choice by Matthew Cooper:

“A lifelong Republican who didn’t talk much about politics during her business career, Fiorina is classically conservative, which makes her a good fit for McCain, who needs to bring large numbers of core Republican voters to the polls in order to win. She’s against abortion rights (though, like McCain, she does support stem-cell research). She opposes gun control, she’s a free-trader, and she’s a tax cutter: ‘It’s the only way to spur in-no-va-tion,’ she says, rolling out each syllable.”

Cooper goes on to say he’d be “shocked” if McCain tapped her (so would Fiorina) as Vice President (oh). But I wouldn’t. I think McCain wants someone he likes and knows and is ideologically comfortable with rather than, for example, a religious zealot cynically chosen to plaster over a hole in his right-wing cred. 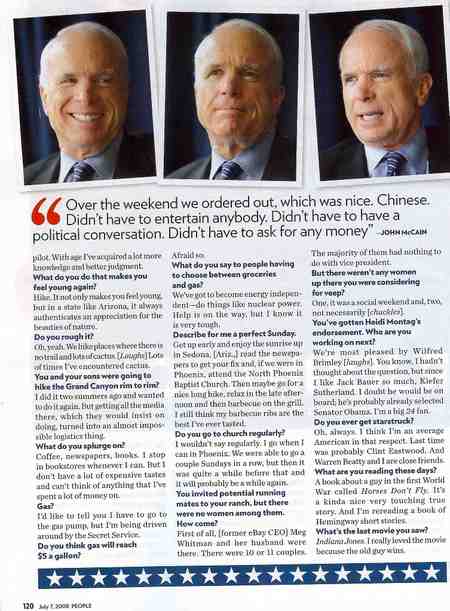 Next comes an exchange between McCain and interviewer Sandra Sobieraj Westfall from People’s July 7, 2008, issue in which he was asked why none of the veep possibles he recently hosted at his home were women. McCain says:

“First of all, [former eBay CEO] Meg Whitman and her husband were there. There were 10 or 11 couples. The majority of them had nothing to do with vice president.”

But needled about why he wouldn’t consider any women there as potential veeps, McCain admits:

“One, it was a social weekend and, two, not necessarily. [chuckles]”

Meg Whitman is not a bad choice for him—she was the eBay queen (which bolsters his legendarily absent economic skills) and is a longtime Republican-party (and Bush) enthusiast. And she’s a woman, which will give pause to the half of the country that generally decides elections and that is more Democrat than Republican of late.

Other possible female veeps for McCain could include Texas Senator Kay Bailey Hutchison (a strong contender) and Alaska Governor Sarah Palin (fat chance). Don’t even get me started on Condoleeza Rice.

Of course, that might up the ante and make a female pick all the more appealing to Barack Obama. (Although due to the conventions’ timing, it’s thought Obama’s pick will be announced first.) Which might open the door for choices like newcomer Hillary Clinton (you may have heard of her), Missouri Senator Claire McCaskill, retired General Claudia J. Kennedy or the oft-discussed Kansas Governor Kathleen Sebelius.

(Or McCain could just pick another dude.)