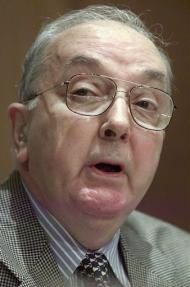 Former U.S. Senator Jesse Helms, a North Carolina Republican who opposed civil right, the MLK holiday, extending voting rights, the United Nations, the Test Ban Treaty, affirmative action, arts funding, and anything at all to do with gay rights is dead. Not until his last year in the senate, under the persuasive powers of U2s Bono did he support any AIDS measures, and then only for Africa with predominantly heterosexual transmission.

From the International Herald Tribune: "He fought bitterly against U.S. government aid for AIDS research and
treatment, saying the disease resulted from "unnatural" and "disgusting"
homosexual behavior.

‘Nothing positive happened to Sodom and Gomorrah," he said, "and nothing
positive is likely to happen to America if our people succumb to the drumbeats
of support for the homosexual lifestyle.’"

To all those people who died too soon or who lived without being able to live life to its fullest as a result of Jesse Helms and his influence, may you rest in peace.

— says Bono changed his mind about AIDS: ""Until then it had been my feeling that
AIDS was a disease largely spread by reckless and …