Following discussions with the Human Rights Campaign, Mars Inc. has pulled a homophobic Snickers ad in which Mr. T shoots at a swishy jogger with a Gatling gun, ordering him to “run like a real man!” and “Get some nuts!” 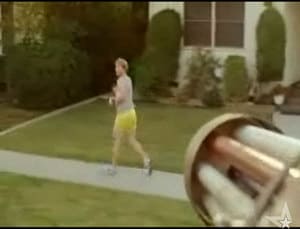 The ad was recently slammed in an editorial by Ad Age critic Bob Garfield, who called on the agency parent Omnicom to stop with its homophobia.

Like two other spots, one for the Dodge Caliber (created by Omnicom agency BBDO, Detroit) featuring a couple of ‘fairies’, and the first well-known Snickers Super Bowl ad (created by Omnicom’s TBWA, New York) which featured two mechanics who accidentally kiss and then force each other to do something “manly” to rid themselves of the gay, a new Snickers spot features the same type of effeminate stereotyping and bullying.

Said HRC in a statement: “Following conversations between the Human Rights Campaign and senior Mars representatives, the company has agreed to pull its most recent ad using stereotypes of gay men to sell its Snickers product line. HRC applauds Mars for taking swift and appropriate action…These kinds of ads perpetuate the notion that the gay, lesbian, bisexual and transgender community is a group of second class citizens and that violence against GLBT people is not only acceptable, but humorous. We are hopeful that Mars will make the necessary changes in their organization to ensure this does not happen yet again.”

View the spot, AFTER THE JUMP…