Miami’s first homicide in 2008 remains unsolved as police search for a 21-year-old Mexican national who is a suspect in the bloody killing of a 68-year-old man. Details of the murder have not released but they have apparently led authorities to believe the killer is targeting gay men. 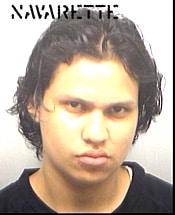 CBS4 reports: “On January 3rd, a caretaker found the body of 68-year old Alexio Bello inside his ransacked El Lago Condominium in the 55-hundred block of Northwest 7th Street. Bello’s murder was the first recorded homicide of 2008. During the investigation, Bello’s friends told police he had recently befriended 21-year old Jorge Espinoza Navarrete a few days before his death. Navarrete, who grew up in Mexico, had recently moved to South Florida from North Carolina and Georgia. Thursday a warrant was issued for Navarrete’s arrest based on forensic evidence found at the scene; a blood finger print and DNA. ‘We believe he likes to target gay men,’ said Miami homicide Sgt. Confesor Gonzalez to CBS4’s news partners at the Miami Herald. ‘He may still be in South Florida.'”

According to the Miami Herald, “Police quickly zeroed in on Navarette, labeling him as a ‘person of interest.’ But the curly-locked young man disappeared. Navarette hails from the town of Las Vigas in the Mexican state of Guerrero. He came to Miami from Georgia and the Carolinas. In May 2007, he was arrested in Georgia for beating up his mother, who lives in Atlanta. That charge is still pending. ‘This is a very dangerous individual,’ said Miami Detective Orlando Silva.”