A study by the Palm Center at UC Santa Barbara has concluded that gays serving openly in the military are unlikely to undermine its effectiveness: 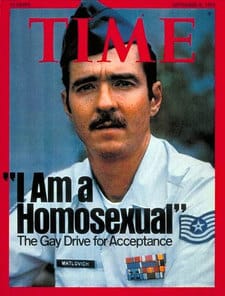 “The study was conducted by four retired military officers, including the three-star Air Force lieutenant general who in early 1993 was tasked with implementing President Clinton’s policy that the military stop questioning recruits on their sexual orientation. ‘Evidence shows that allowing gays and lesbians to serve openly is unlikely to pose any significant risk to morale, good order, discipline or cohesion,’ the officers states.”

According to the AP’s report, “Shanahan said he was struck by the loss of personal integrity required by individuals to carry out ‘don’t ask, don’t tell.” He said: “Everyone was living a big lie — the homosexuals were trying to hide their sexual orientation and the commanders were looking the other way because they didn’t want to disrupt operations by trying to enforce the law.”