Judge Karen Cassidy issued a ruling in the McGreevey divorce trial today. In it, she ordered both parties to abide by the sealed custody and visitation terms they agreed to in early May with regard to their daughter. She also ruled that Jim McGreevey has no alimony obligation to his wife Dina Matos McGreevey (he had argued he was too poor to afford it) and that both parties would pay their own health insurance costs. The former Governor was ordered to pay $250 a week in child support. Matos McGreevey had asked for $2,500 a month alimony for four years and $1,750 a month in child support. 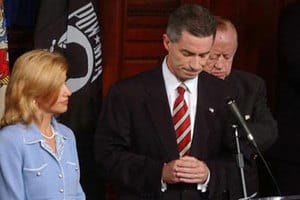 McGreevey was also ordered to pay his wife just over $108,000, representing half of his financial assets. He was not ordered to pay her any of his earnings from his book The Confession.

In her opinion, Judge Cassidy noted that both parties had overriding motivations that clouded the claims in their trial: “The McGreeveys clearly had agendas. As previously addressed, their anger seemed to override any ability to testify credibly or to be reasonable. For example, Mr. McGreevey’s steadfast position that he was somehow unable to obtain employment contradicted directly with his position that he was actively attending seminary and pursuing a full-time program. Clearly, he cannot do both, but he somehow could not simply say that, instead contradicting himself over and over again. When faced with facts that he could not even support himself on his current salary, let alone both his daughters and possibly his wife, he was unable to provide a cogent explanation. Mrs. McGreevey’s demeanor in the courtroom and her position of an entitlement to an extremely generous standard of living reflected her anger and disappointment as to the end of her marriage. Her testimony was designed to generate a greater amount of support based upon circumstances that ended her marriage. The factors she suggested are not supported by the law and evidence.”

Perhaps they’ll both shut up now.