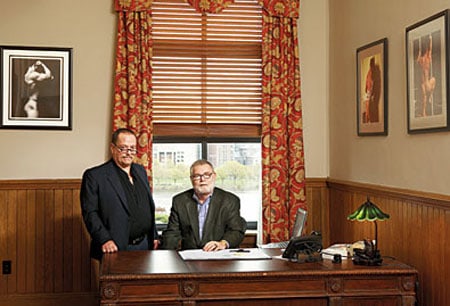 As a response earlier this week to revelations that Manhunt Chairman and founder Jonathan Crutchley (above, right) had maxed out his individual personal contributions to vocal gay rights opponent Senator John McCain ($2300) which we reported on Wednesday, Crutchley has apparently been pressured by the board of the company to step down as Chairman.

I received this statement made by founder Larry Basile (above, left) in my inbox late yesterday from an anonymous source at Manhunt and called Manhunt which confirmed its legitimacy. Please read the statement below:

“There has been a depiction this week of MANHUNT being Republican. All my life, I have never voted to the right, and have always been generous to 20th Century Democrats, Gay and Lesbian Advocates and Defenders, HRC, and the NGLTF.

“I was arrested at the Supreme Court and FDA in Act-Up actions, and was the founder of the Grass Roots Gay Rights Fund, which over the years has raised more than $800K. I was the Treasurer of Out Week magazine, which was a powerful force in its time. I began giving Obama donations in March 2007, and I have sent several checks that have yet to be reported. The hat and t-shirt I wear say ‘Obama for President’, as does the sign in front of my house. I refuse to live in a country that is so marred by war and hate. To me, Barak (sic) is by far the best candidate, probably better than we deserve.

“It should be known that Jonathan Crutchley’s donation to McCain left the entire Board in disbelief. I am disappointed that we have lost some customers, and I understand the anger. It is too bad for the web site if we lose customers, but PLEASE never refer to me as a Republican. I consider it an offense.

“Earlier today, at the request of the Board, Jonathan has stepped down as Chairman. Sincerely, Larry Basile.”

One last note: We never referred to Basile as a Republican. Also, though Crutchley has stepped down from the board, as far as we know he’s still collecting money from thousands of gays and donating it to a presidential candidate who would deny them status as equal citizens.