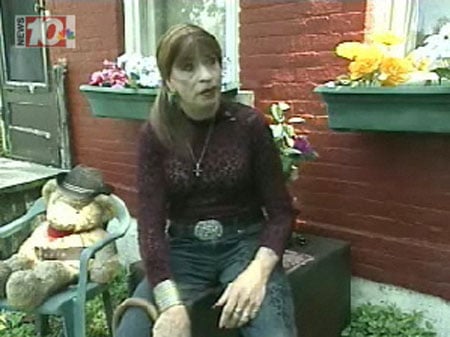 Yesterday I posted about a killing outside Nasty D’s gay bar in Rochester, New York following a reported argument inside the bar. Details on the argument remain slim, but some other details about what happened in the parking lot where Sandra Arena got in her car and ran over five people, killing a young man, have emerged.

The murder victim is Chad Coleman, an aspiring singer who once auditioned for American Idol. Friends described him as “a phenomenal singer.”

Sometime early Wednesday morning, Arena got in her car in the parking lot outside Nasty D’s and plowed into a group of people, injuring four and killing Coleman.

Karen Anne Bills (whom our tipster suggests may possibly be transgender) heard the commotion from across the street where she lives, and walked over to the parking lot with a cane and and an axe. She says she had to take action:

“The only thing I can think to do is somebody’s got to stop this woman so I planted the ax in the windshield that got her attention. And at that point I told her don’t move, don’t move, you’re mine if you do…All she did was look at me and said well somebody hit me. I don’t know what possessed the woman I don’t.”

Watch a news clip, AFTER THE JUMP…

More on Bills from the Democrat and Chronicle: “While Karen Anne Bills was watching a late-night, televised Bible study on cable early Wednesday, 22-year-old Chad Coleman was singing karaoke at Nasty D’s Bar & Grill down the block at Alexander Street and Broadway. Their paths crossed about 1:45 a.m. when Bills heard a commotion in the parking lot across from her house, at Averill Avenue and Broadway. Bills said she picked up an ax by her back door and crossed Broadway to see what was going on. She heard screams and the thud of bodies striking the pavement. She dialed 911 and moments later put herself in front of the vehicle that had struck Coleman, of Greece, and four other people. She smashed the ax into the car’s windshield in an attempt to stop the driver from hurting more people, she says. ‘There was nothing we could do. Nothing,’ said Bills, a regular at Nasty D’s. ‘He was a sweet boy, with a voice like an angel.'”

Below, an image from the vigil held last night at the site. More here.

Watch a WHEC news segment on the incident, AFTER THE JUMP… 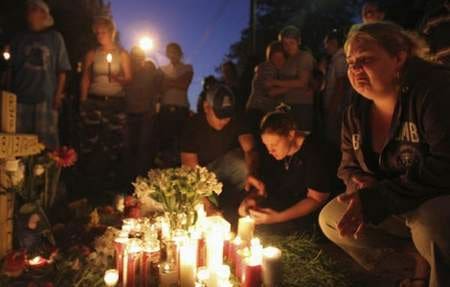