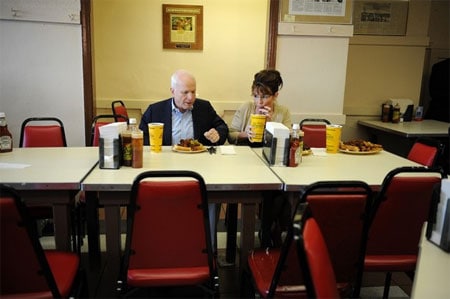 The McCain campaign finally agreed to have Sarah Palin do an interview, with ABC’s Charles Gibson, later this week. Palin has not spoken to the campaign once since her nomination. There are eight weeks left until the presidential election and yet the public knows little about this woman who will be a heartbeat away from the presidency.

Why? She’s “not ready” according to folks with knowledge of the McCain campaign. Over the weekend in an interview with Chris Matthews, former McCain spokesman Todd Harris suggested that it might be two weeks before the Alaskan governor is programmed well enough to address the press and the public:

Now, with the new interview with Gibson scheduled, it looks like it’s going to be a softball interview basically run by the McCain campaign itself.

“The tell comes high up in the AP story by David Bauder. The second graf reads …’Palin will sit down for multiple interviews with Gibson in Alaska over two days, most likely Thursday and Friday, said McCain adviser Mark Salter.’ Political interviews are never done like this. Because it makes the questioning entirely at the discretion of the person being interviewed and their handlers. The interviewer has to be on their best behavior, at least until the last of the ‘multiple interviews’ because otherwise the subsequent sittings just won’t happen. For a political journalist to agree to such terms amounts to a form of self-gelding. The only interviews that are done this way are lifestyle and celebrity interviews. And it’s pretty clear that that is what this will be.”

One AmericaBlog reader did get a chance to ask Palin a question at a recent campaign stop. AmericaBlog notes: [Reader] Jim…has now asked Sarah Palin more questions than the entire political press corps COMBINED.” The question was about corrupt Alaskan senator Ted Stevens.

Real interviews (not carefully controlled propaganda) must be demanded by the public, and offered to the voters.